The Power of Being Known: An Update from Rwanda

One of our family's favorite series is The Chronicles of Narnia by C.S. Lewis.  In the fifth book, The Voyage of the Dawntreader, one child asks another, "Who is Aslan?  Do you know him?" The other child responds, "Well--he knows me."

Many are familiar with the stories of Narnia, and know that Aslan represents God, as He gently but fiercely guides and protects the children through their journey in Narnia.

I love the significance of this one line. Those four words demonstrate the power of simply being known.

After Mark's recent visit to Rwanda, these four words also symbolize the transformation he witnessed at every turn.

These children---who we have walked with and known for four years---are not the same children we first enrolled in school two years ago. They aren't even the same students who were dropped off for school in January of this year.  It is as if the power of knowing they matter, not just to us and the others who support them through His Chase, but more importantly to a God who fiercely loves and protects them, has settled their spirits and allowed them to finally trust.

This truth---knowing they belong and are not forgotten---is leading to some crazy awesome things.

They are also doing what they are gifted to do. The first two years of this education program were spent simply trying to enroll every student we could into the two or three schools that had agreed to accept the students from Noel, exactly where they were.

But as the students came through that transition (with a few growing pains!), and the Rwandan staff took time to know them as individuals, the search began for more specialized school programs, and we were finally able to better place the children in the environments they needed. His Chase now has students all over the country, in schools and vocational training programs, that fit their passions and talents.

And, the list goes on and on. The combination of these things--being known, and knowing what you are gifted for--are launching these students into a whole new world of success!

I wish we had time for more stories from Mark's time in Rwanda, but I'm going to share about five of our students he has spent time with this week. All of these students demonstrate so well what this trip has exposed: a calming of what was once restless spirits, a flourishing of gifts and talents, and a great variety of roads traveled by these students! 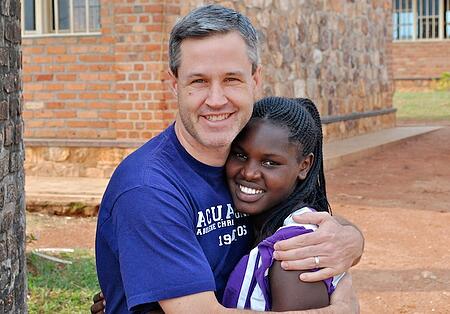 This is Laurence. She has spent her life at Noel Orphanage. She attended secondary school in our program, and then, in January, began her vocational training as a hairdresser.

She is now #1 out of 92 students in her class, both in theory and in practice!

This is the part I love: Jane, Mark, and Kevin drove for hours to reach her school in the remote mountains of Rwanda, and as they rode along those bumpy but beautiful roads,Mark said he felt as if he was "searching for the lost sheep"...that one sheep who was alone, yet was as important as the other ninety-nine. Even after they got lost, traveling down various dirt roads to find their way, they finally arrived. And, Laurence came running down the hill, elated that they had come this far, just for her.

They took her to lunch, showed her a precious video from her sponsor family, and poured into her the encouragement to continue succeeding.

This day was all about her---and one single student working hard in the mountains, now knew without a doubt that she mattered...that she is known and very, very loved. 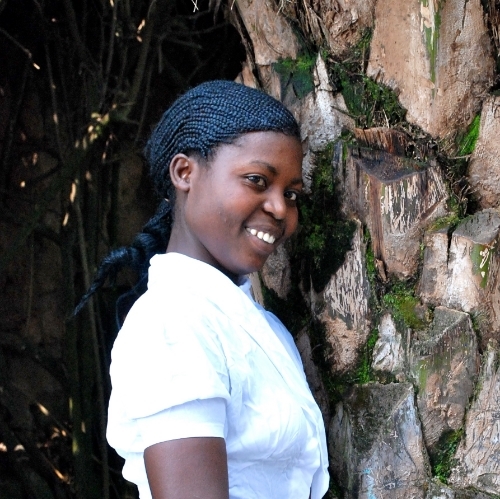 This is Claudine.  She has one of the sweetest, most gentle spirits I have ever known. She has taken a while to really come out of her shell and show her personality, but now, she lights up a room with her smile.  Claudine worked and worked and worked at an English-Only education program last year, and came a long way...but she still struggled academically.

After many years of barely attending school at Noel, she learned to read well and to speak English last year, and was one of our hardest working students, by far.

But, it was time to send her on to a place where she could learn skills for a life career. With her work ethic, we knew she would succeed, and were so excited to enroll her, and a few others, in a training program for Hotel and Tourism Management. When we sent her off in January, she gave me the longest hug, with tears in her eyes, thanked me and said she was sad to leave our program. I explained that she was absolutely still a His Chase student, and that we would still visit her and watch over her, even though she was following a new track of education.

She still didn't believe me. She thought she was on her own, no matter how I told her the truth.

So, this week, Jane had the TERRIFIC idea to have Mark stay in the hotel where Claudine was doing her internship, to surprise her and the others at breakfast as they worked and served!  I can't describe my excitement as I heard about this plan.  Claudine was about to SEE the truth with her own eyes. We have not left you!  We still know you, we still care, and we celebrate your gifts and talents and training with you!

It was exactly as you would expect. Screams and tears and happiness...and many hugs. (Claudine hugs are the best!) Claudine and her classmates (who are also His Chase girls) gave them a tour of the hotel, made Spanish omelettes, and glowed with pride at all they have learned.

Claudine's story is yet another example of the significance of this trip, as Mark was able to spend quality time with each of our students, all over Rwanda, celebrating who they are and the talents they have! 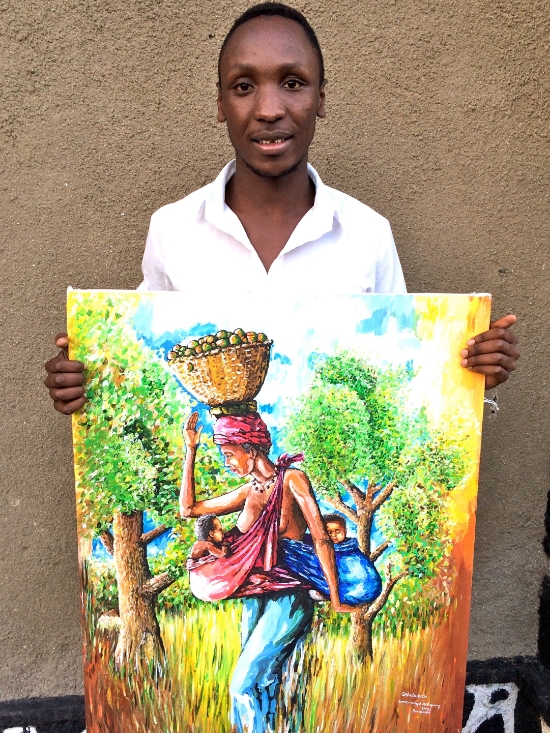 This is Alphonse. He lost his entire family in the genocide of 1994, and has spent his entire life at Noel Orphanage. Although he may be considered weak in some school subjects, he is incredibly gifted at art, and every time we visit, we are blown away by his talent.  Mark was able to visit both Alphonse and Josiane, our art students, and spend time at their top-tier art school. When they both revealed beautiful paintings they created as gifts, he was overwhelmed by the way God is developing these talents in these two young students.

We have no doubt that Alphonse will have a bright and stable future, because of the training he is receiving, as his school is preparing him in every way to be an artist that inspires the world! 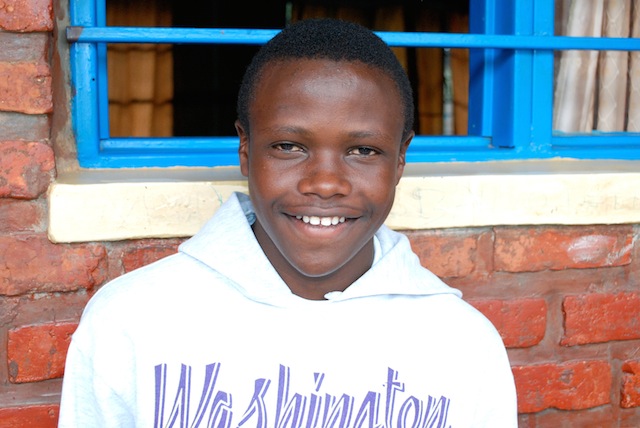 This is Moses. He joined our program last year as a Class Five student, and is now in Class Six at age 14. He was already known at Noel for his soccer skills, but none of us really knew his gifts until he began his studies at Sonrise School. It was quickly evident that his talent was no ordinary talent. In fact, even after we moved most of our primary level students to schools closer to Kigali, Moses and a few others remained at Sonrise to play soccer for the school team.

He is now succeeding in all his classes as well as performing as the TOP soccer student at the school, competing in tournaments around Rwanda, and referred to by the entire staff as "the star".

He is now exploring some possibilities for secondary schools next year, where he could play soccer, and possibly even begin training with the Rwanda National Team! This is so exciting, as we once again recognize that a very specific talent was placed in him from the beginning of his life, and now has the opportunity to flourish. 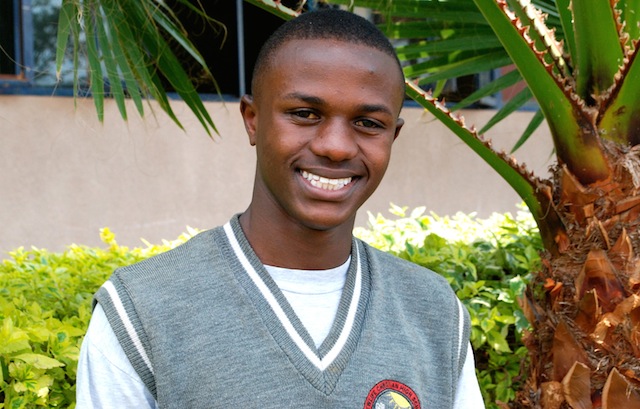 This is Baraka. Even with all the children we have known and all the trips we have taken to Noel Orphanage, Baraka was never a student we met before enrolling him in our education program. He wasn't the one running to meet the Americans as they stepped out of the bus. Instead, he was off studying somewhere. He is quiet, reserved, and extremely focused. In an environment that remained in constant chaos, he still remained focused on his goals. Sometimes I wonder what his journey would have looked like in the local schools near Noel.

With his self-motivation and brilliant mind, he sky-rocketed to the very top of his class the first year he joined the His Chase program.

We were shocked. He had almost perfect scores in very difficult classes! And, when we would come to town, someone would have to go find Baraka, because he was always off studying or working in a group on a project.

At the end of last year, he was accepted into Africa New Life High School, the #1 school in Rwanda. And, he hasn't stopped succeeding, even when the stakes are higher and the competition is much fiercer. He and Rodrigue, also of His Chase, occupy the top two spots of their specific field of study, and both desire to be engineers!

These five students and their journeys have all been very different. Yet, in many ways, they are the same.

They have been called by a God who created them and knows them.  He has plans---very specific plans---for each of these students, and He is securing their futures as they trust Him and glorify Him with their gifts and talents.

Our constant prayer is that along this journey, each student has that moment when they turn to another and says, "He knows me". And, with that knowledge, may they change the world for others.

This trip was an extremely blessed one for Mark and Kevin, and we would like to thank all of you for your prayers. The Lord is truly working wonders in the lives of our students. We would not be able to serve students like Laurence, Claudine, Alphonse, Moses, and Baraka, without all of you who have decided to say "yes" and join the chase with us. Words will never aptly express our gratitude.

As we enter into the final days of our Back-to-School campaign, we ask that you consider making a donation so that we will be able to continue to support all of our students who do not have monthly financial sponsors. Your one-time gift goes along way! Thanks to a generous donor, every donation (up to $10,000) made in the next 3 days will be matched dollar for dollar!