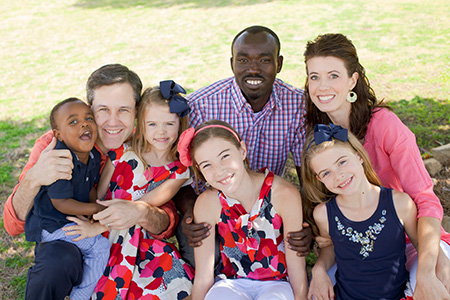 His Chase Foundation was founded in 2010 by Mark and Chelsea Jacobs, in honor of their son, Chase Allen Jacobs.

Chase was their fourth child, and passed away at birth. Shortly after their devastating loss, their heartbreak was turned toward other children around the world who had also suffered loss: the loss of a parent or stable family to call their own.

The suffering of disadvantaged children now had new meaning to them, and their eyes were opened to needs like never before.

As they walked through their own grief, the Jacobs family began to find healing in exactly the place God promised they would---among the brokenhearted.

"Set the oppressed free...share your food with the hungry...provide the poor wanderer with shelter...when you see the naked, clothe them...then your light will break forth like the dawn, and your healing will quickly appear." Isaiah 58

After what began as a simple way to honor their son with school sponsorships for children in need, the response from loving family and friends quickly grew to be a ministry larger than they ever dreamed possible! Mark and Chelsea filed for non-profit status, as the orphan care projects began pouring in, and they have been running to catch up with God's plans ever since!

The Jacobs, along with their three daughters, adopted their son and brother, Gabe, from Rwanda in 2012, and also host Claver, a college student from Noel Orphanage, as he studies in America. They are grateful for the way God has expanded their family, and that Rwanda is such a significant part of their home. Mark and Chelsea, and all their children, enjoy traveling to Africa as a family, and count it a significant blessing to know and love so many wonderful, gifted children across the world. It's truly the passion of their family and the place where they have all found new hope and new life, right alongside the children they sponsor.

As His Chase continues to increase their commitment to these students in Rwanda, new opportunities to "join the chase" continue to grow as well. The Jacobs family and the His Chase Foundation would be thrilled to partner with you to bring hope to the children they serve.